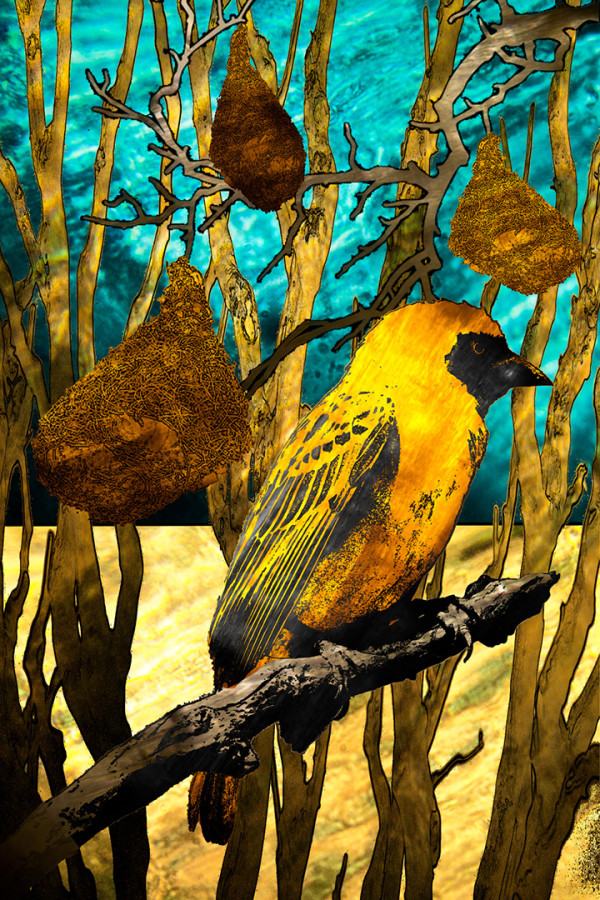 My project “The Forests Now Gone” has always attracted a lot of attention and posed many questions, both on its message and the method I use to execute each image.  This post will not go into the message behind each image but will shed some light on my process for making them. 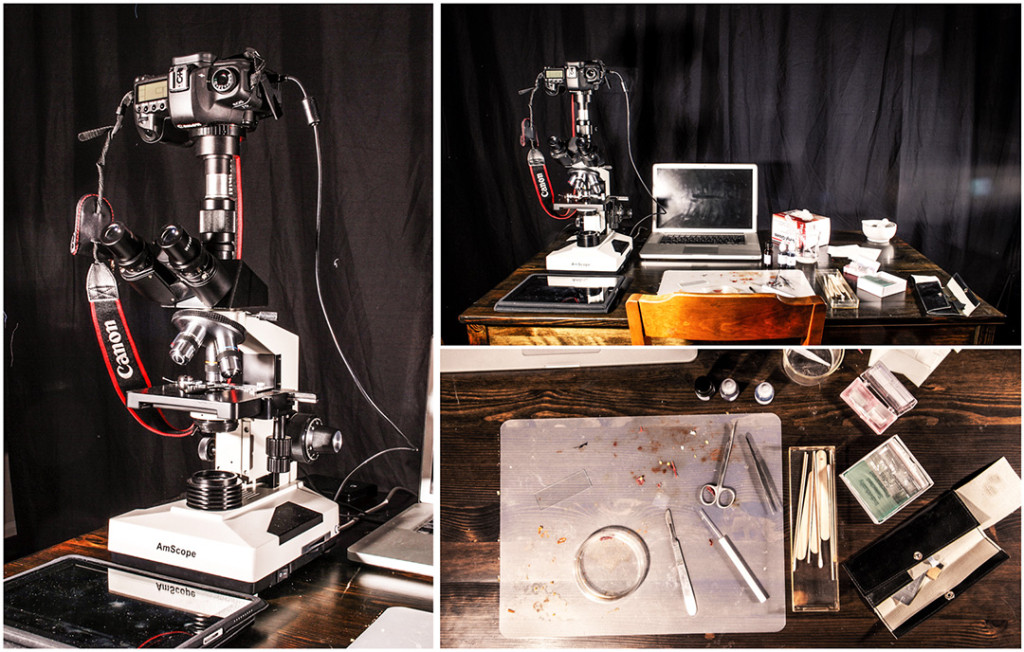 My process is split into two parts.  The first being acquiring my content images.  The first step is to prepare slides of the substance needed for each specific image.  Next I photograph them using a microscope fitted with a camera adaptor.  The process of photographing has to be completely hands-free.  The exposures range from 1 second to 2 minutes and touching the camera would compromise the image.  To solve this problem I use a program from OnOne that allows me to control all the cameras functions on an Apple device: iPhone, iPod, or iPad.  The camera is tethered to a laptop where the images are wirelessly transferred to.  The biggest challenge of this part of the process is focusing.  It is very difficult to judge the focus, as the image in the viewfinder is slightly different from the image being taken.  There is also a slight blurring effect around the edges of each image.  If anyone reading this has ever used a Lensbaby they will know this effect.  In the end each slide could take 50 frames to get the right image. 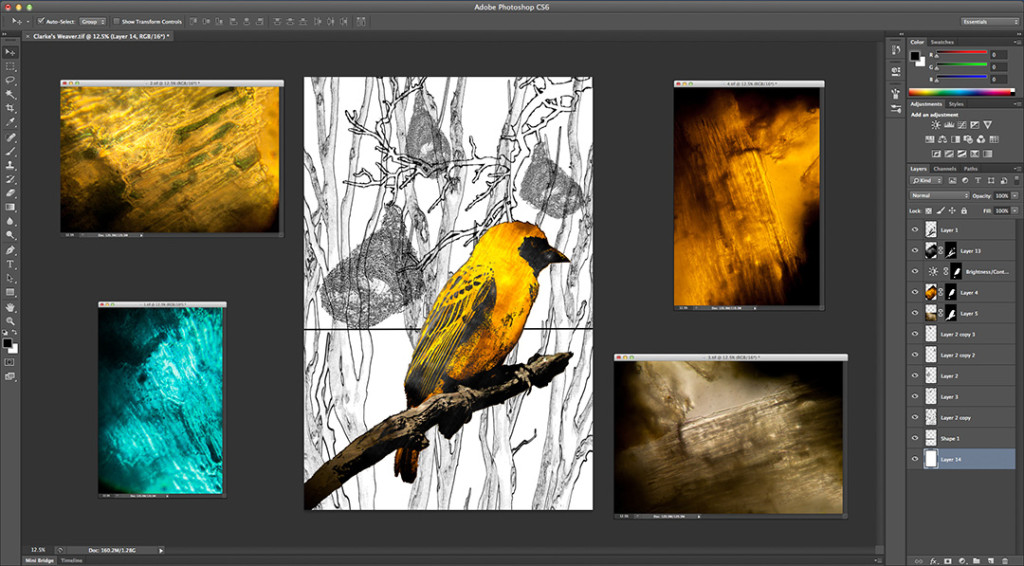 The second part of this process is all done in Photoshop CS6.  I create a template of the image using coloring book pages, using a separate image for each aspect of the template.  When it comes time to drop in the microscope images I use these pieces of the template as a means of selecting where each will go.  First I place the microscope image over the wanted area, then hide the image by clicking the eye in its layer.  Using a wand tool I select the area around the template piece.  Once that area is selected I invert the selection so that the desired area is selected.   With that area selected I select and reveal the microscope image layer.  Then I create create a mask by clicking on the mask icon found third from the left at the bottom of the layer window.  To add detail back in the image I use a second microscope image just in the blacks of the template.  To select the just the blacks I use the Color Range selection tool.  The steps for this are a bit different from the first process.  As before you place your microscope image first.  Hide all the layers apart from the template piece you want to select from.  Go to Select > Color Range and a window will open.  Here you can do one of two things.  One, use your eye dropper to select the blacks or two, select the area around what you want to select making sure the “invert” box is checked.  Now reveal all the layers your hid.  Create a mask for the microscope image.  The selected area should show where you made your selection.  Repeat this process till you have completed your image. 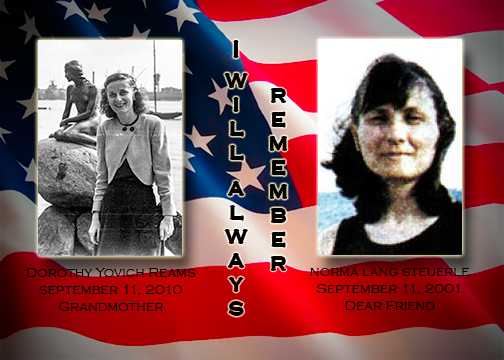 Every person has that one day in a year that he or she remembers most.  The reason for remembering that day is as unique as the person that remembers it.  It could be the first day of school, or the day that person fell in love.  For me, I remember September 11th, or 9/11 as many call it, but not one specific year.   That day has two years imprinted in my memory.  In 2001 I lost a dear friend, Norma Lang Steuerle, in the terrorist attacks against my country and in 2010 I lost my grandmother, Dorothy Yovich Reams, to cancer.  Not much is know to the people in this world about who they were or what they did.  This is sad to me because they were both amazing people each in their own way.  I hope this post will shed change this fact and the reader will know more about these two wonderful women.

Beginning with my friend Norma, she was a clinical psychologist who worked with children who had, among other things, ADHD (attention deficit hyperactive disorder).  I first met her when I was in the third grade and was in the seventh when she was killed.  By the time I was 11 she had become the best friend I had.  She was exception to the stereotypical psychologist.  Instead of just talking to me about problems she treated me on a human level.  When I met with her she and I would play board games or she would teach me a new card game.  She was a true friend.  The week before 9/11 she told me she would be taking a trip to Japan and would be back in a few weeks.  Her words where “I’m going on a trip.”  I wish I had known they would be her last words.  The day of 9/11 I was sick at home.  I could not believe what I was seeing on the TV.  The horrific videos and images still pass through my subconscious.  I would never had thought that Norma was on the plane, but she was.   She was on flight 77 which crashed into the Pentagon building.  There was nothing left of her after the smoke cleared.  I found out all of this a week later when my parents pulled me aside and said 5 words, Norma was on the plane.  I didn’t need anything more than those words to understand the situation.  She was gone and was never coming back.  It was one of the hardest loses I ever had.

Nine years after losing Norma, my grandmother, Dorothy Yovich Reams, died after an operation to treat stomach cancer.  I know very little on how she died as I was away at college, but I know from her past that she had a good and rich life.  She was born to parents who came from the former Yugoslavia, one being Serbian the other Croatian, but she grew up in the United States.  During World War Two she worked as the secretary for Secretary of State James F. Byrnes.  This job brought her to peace conferences that followed the war.  She interacted with many historical figures at these conferences going beyond Secretary Byrnes.  I was brought up on the stories of these conferences.  Among my favorites was the time when she was addressed by President Truman as she locked up her hotel room one morning.  After she met and married my grandfather, who was also at the conferences, she lived a foreign service life.  She lived and traveled to many places, meeting people you find in the history books.  Living in one of my grandfather’s stations she and my family ran into Mother Theresa when going to donate some clothes to a shelter.  These days I am responsible for scanning and restoring the photos from her past.  I still find myself astounded by the images I find.

An Image to Start With 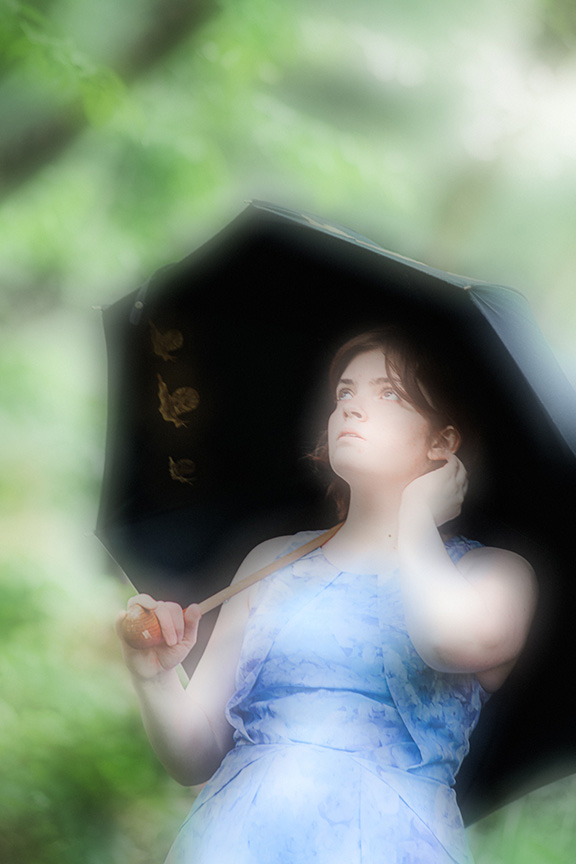 A portrait of myself taken by Lilia Turcios.